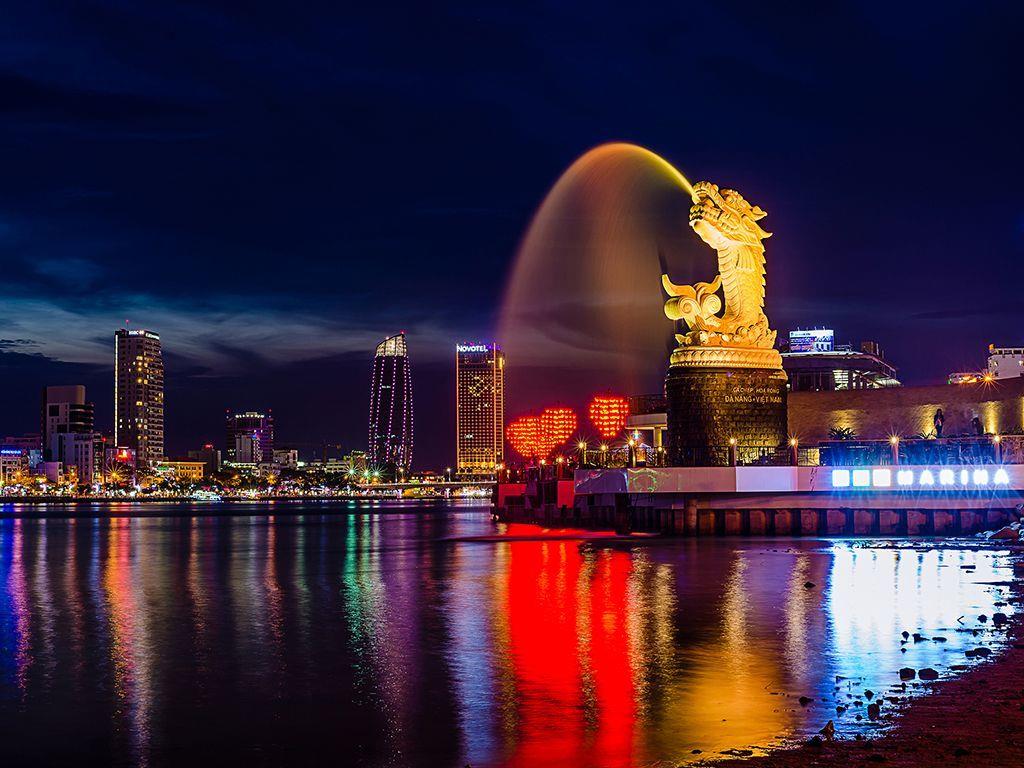 Located on the coast of the South China Sea at the mouth of the Han River, Da Nang is the fifth largest city in Vietnam after Ho Chi Minh City (Saigon), Hanoi, Can Tho and Haiphong. It  is the commercial and educational centre of Central Vietnam, as well as the largest city in the region.

Some people considers that Da Nang is famous for Ba Na Hills, a hill station and resort located in the Truong Son Mountains. But if you also think like that, I have to say you are wrong! There are severals natural beautiful sightseeings that you would never have imaged before. Because it is located within 100 km of several UNESCO World Heritage Sites, including the Imperial City of Hue, the Old Town of Hoi An, and the My Son ruins. That means if you come here, you can move easily to many other places of interest.

What to visit in Da Nang?

Old Town Hoi An, the city’s historic district, noted since 1999 as a UNESCO World Heritage Site, is recognized as an exceptionally well-preserved example of a Southeast Asian trading port dating from the 15th to the 19th century, its buildings and street plan reflecting a blend of indigenous and foreign influences. Prominent in the city’s old town is its covered “Japanese Bridge”, dating to the 16th-17th century.

The early history of Hoi An is that of the Cham. Over hunreds of year, it still remains almost untouched by the changes to Vietnam. As its name “peaceful meeting place”, Hoi An has the breath of time: history, traditional architecture and crafts such as textiles and ceramics. 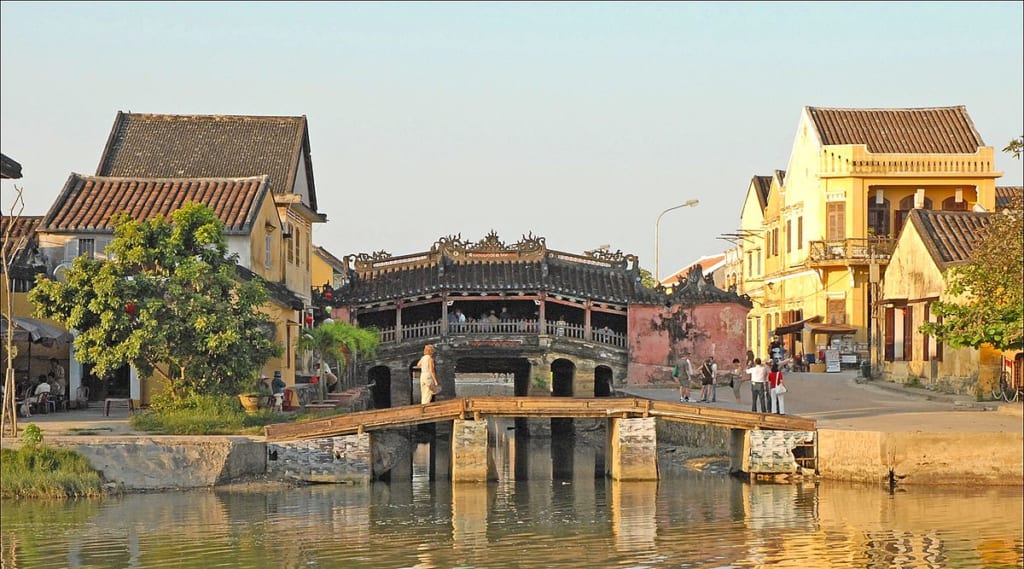 The Japanese Bridge is a symbol of Hoi An (photo: Wikipedia)

You can book a tour to Hoi An to experience the Hoi An Lantern Full Moon Festival taking place every full moon cycle. The celebrations honour the ancestors. People exchange flowers, lanterns, candles, and fruits for prosperity and good fortune.

My Son is an archaeological site dating back more than a thousand years, in Quang Nam. It is 70 km west of Da Nang, located in a remote forested valley and declared a UNESCO World Heritage Site in 1999. This former capital and religious center of the Champa kingdom once contained in excess of 70 style temples and stupas, but now it remains more than 20 structures because of badly damaged by bombing raids in the 1960s. Many statues, sculptures and reliefs recovered from Mỹ Sơn are kept in the Museum of Cham Sculpture, near the Hàn River in the heart of Da Nang. Dating from the fourth to the 14th centuries, the sensual artwork on these works depicts daily activities as well as Hindu and Buddhist religious themes. 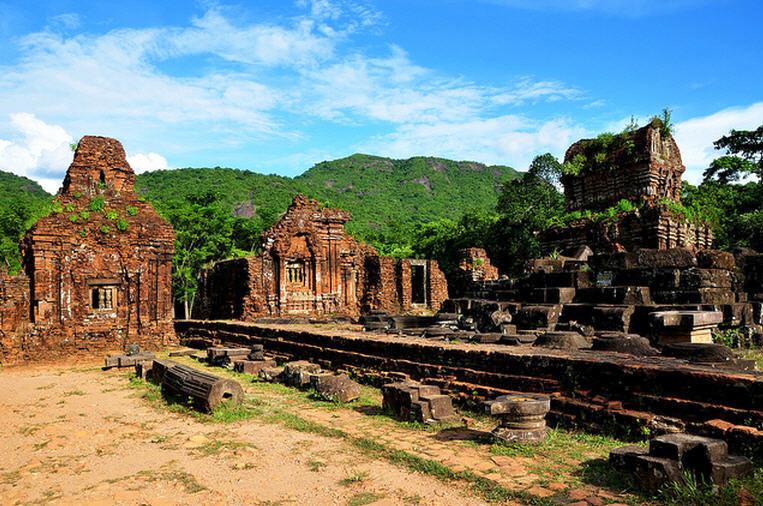 If you are a fan of history, why don’t you take a trip to this destination to visit the Cham’s Culture?

Non Nuoc Beach is a white sandy beach on the outskirts of Đà Nẵng. During the Vietnam War,  it is well-known as a destination for American troops . Today, the beach, along with Mỹ Khê beach to the north, are home to expensive resorts, surfing and entertainment facilities. 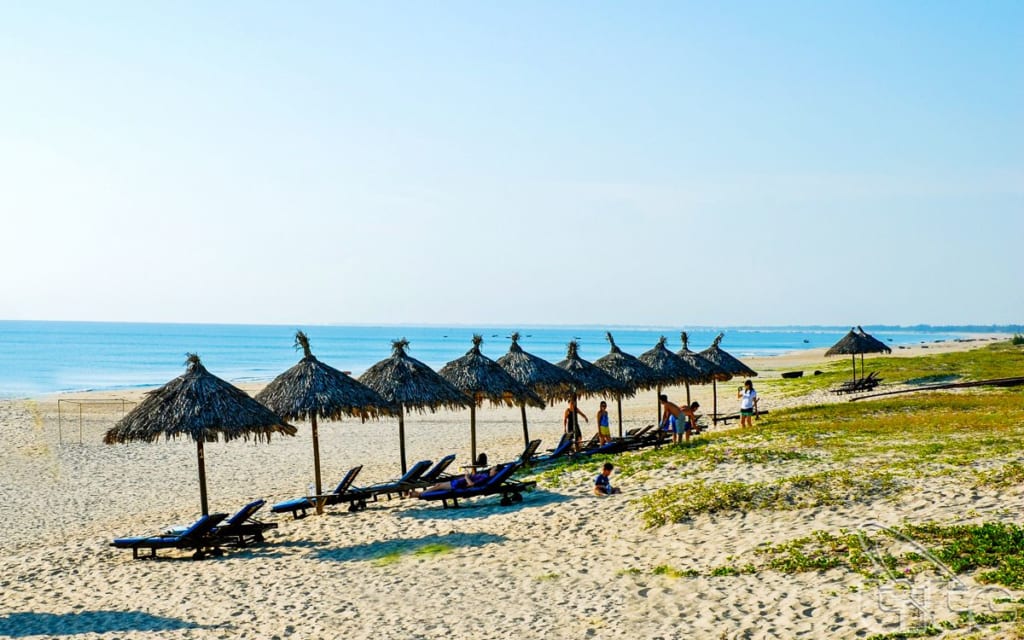 The Marble Mountains is a big natural landscape, consists of many rocky limestone outcrops jutting out of the beach just south of Da Nang. Paths lead to the top of the forested cliffs, providing views of Non Nuoc Beach and the South China Sea. Originally, the Cham people inhabited in the cliffs caves. Then, the Nguyen Dynasty built numerous pagodas among the caves, so it takes you really long time to visit all of them. The Marble Mountains is a place for various artisans producing sculpture and artwork at its base at Non Nuoc Village.

How to get to Da Nang?

Da Nang International Airport is located at the centre of the city. This is also the third largest international airport in Vietnam, you can arrive in Da Nang easily.

Da Nang train station is approximately five kilometres from the city centre. You can book tickets through most hotels and guesthouses with a minimal commission charge and don’t need to go there to book your tickets. Soft seats are recommended for long journeys, but if you are just swinging up to Hue, go for the hard seat option, as it’s far more fun and cheap.

Passenger car to Da Nang is usually the North – South bed-car. Ticket price and quality are not much different, you can refer to the ticket price of Hoang Long, Mai Linh, Hlink, Thuan Thao, Phuong Trang, Sinh Cafe …

In Hanoi, you can take the bus to Da Nang at Giap Bat station. In Saigon you can buy ticket at the Eastern Bus Station.

Note: We advise you to buy in advance, or call to avoid ticket exhaustion.

Where to stay in Da Nang?

A La Carte Hotel Da Nang is located on beautiful beach My Khe. It has a distance of 6 km from the airport, about 25 km from Hoi An, is quite convenient for you to move to the famous tourist attractions of the city. This is also the first hotel in Vietnam with swimming pool on the top level which helps you to have an extent and absolute relax.

People considers Da Nang to be the Vietnam’s most liveable city, so if you still don’t know where to go this holiday, let’s go to Da Nang!